Once Upon a Time, you could get into Disneyland for FREE on your birthday.  And one year, after we were recently married, my husband and I decided to go for his birthday.  So, as carefree (read childless) adults will do, we made the 30 mile trek from our home in Los Angeles to Anaheim, California to partake in the Magic that is the Happiest Place on Earth.  It was here that we experienced a scenario rather common to deaf and hard of hearing folks – if people don’t know we can’t hear them, they think we’re just plain rude.  And this BUGS me!  Yes, in the land where grown adults find it perfectly acceptable to wear mouse ears perched atop their heads, go on rides they know will get so wet they will look as if they’d been sprayed with a fireman’s hose, and gleefully take photos with giant animated dogs, ducks and mice, I still care what people think.  Nevertheless, there was a (Deaf) adventure ahead.

Can I see some ID?

When we had successfully established at the admission booth with valid identification that it was, in fact my husband’s birthday (35 cough, cough years ago), we paid for my ticket and received our passes for entry.  As we finished our transaction, the helpful cashier cast member then shyly slid a large shiny button under the glass and indicated my husband should put it on.  As we proceeded towards the entry gate, we saw the button was emblazoned with a lilac-colored birthday cake on it that read, Happy Birthday, PAUL!  He looked at me with terror in his eyes and said, “I don’t want to wear this.”  I said, “I think it may be required” and pointed to several children who were wearing similar buttons, Happy Birthday, AADEN!  Happy Birthday, DESTINY!  “See?  This way you can keep track of all your birthday-buddies”, I added helpfully.  He scoffed, briefly rolled his eyes and then gamely pinned his birthday button to the middle of his shirt as we got in line behind a group of children as tall as our waists.  Birthday-buddy Hannah was smiling at him – pointing back and forth to her button and his button. 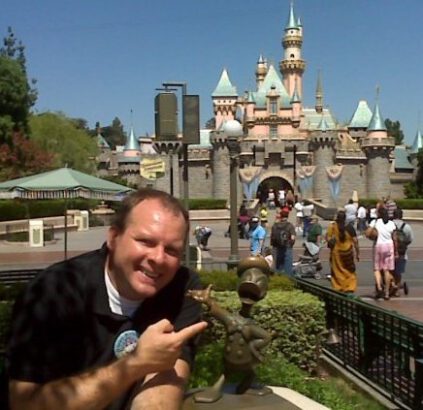 Aside from the extra smiles we received, he seemed to forget about the pin throughout the day as we walked around, rode the rides, and stood in many lines. Naturally we noticed which areas were more deaf-friendly – some areas had captions already playing, some not at all, others you needed a special “remote” to turn them on.  We noticed a few cast members who knew basic fingerspelling or who knew to point or write something down – VERY helpful.   As we made our way around the park, I noticed I kept hearing something, maybe it was music or an announcement.  It was a pattern so subtle I didn’t pick up on it until we were in line for the last ride of the day.  Surely the longest line, we were by then tired (and still VERY WET from the water ride I might add) so we weren’t very chatty.  One of the cast members was making his way through the line to sweep up after a long day, and as he did, he kept repeating something I couldn’t make out.  It had a uniform rhythm, dah-dah-dah-dah-dahhhh!  What did he say?  Are they closing the ride?  As he came closer to us it sounded more like Hup-a-dah-dah-dahhhhiee! It had variation on the last word and I noticed he wasn’t saying it to everyone, just some people.  Finally, he’s sweeping past us bellowing in a sing-song voice, “Happy Birthday, PAUL!”  My eyes darted over to the birthday boy who was looking in the other direction having no idea this man had personally wished him a happy birthday.   With urgency, I nudged and told him of my discovery, but it was too late to express his thanks (or at least find a way to be smooth about it) as the friendly cast member was already further down the line singing, “Hup-a-dah-day-Rachel!”  Duh.  I suddenly noticed all the lilac-pinned birthday-buddies in our midst.  Seemingly, every fourth person in line was wearing a Happy Birthday! pin and was crammed into this line making a last ditch run for this ride before the park closed.  (Hey free Disneyland tickets are nothing to sneeze at, they came running to Anaheim.)  Without a way to explain we are deaf-not-ignoring-you in quick succession to every well-wishing cast member who might not see us signing or notice a hearing aid, rather than go on hyper-alert or seek out a second pin proclaiming, I’m also DEAF! Paul took the pin off.  Birthday FINISH.

Brushing off the incident, he then busied himself preparing for the ride ahead by whipping out an enormous plastic zip-loc bag and began fluffing it open to pack away his hearing aid to secure it so it wouldn’t fly off mid-ride.  As my cheeks turned pink, I casually mentioned some people carry discreet compact boxes designed for the same purpose to which he replied, “I’m old school.”  This was then punctuated by a loud, “PA-TWEET!!!” from his hearing aid he had just chucked into the zip-loc.  Well, what can I say to that?  I guess some people will always be comfortable fussing with their hearing aids in broad daylight for all the parents and children at Disneyland to see.  The rest of us, not so much.

So that was our big (Deaf) Disney Adventure.  We can only do so much about communication issues.  Don’t worry so much what others think.  Give yourself a break and just enjoy the ride!

Deaf at the Doctor

Deaf in the Drive-Thru

The Problem with Sound of Metal

The Right Thing for Deaf Children

Deaf at the Dentist

What do you think? Cancel reply

10 Signs You’re in a Deaf House